Welcome to Randhir's blog!!! You will find links to popular categories/posts on your right. If you are new here, please subscribe to our RSS Feed and visit Randhir's website at www.randhir.net

B.PAC - Not a great start

A few friends asked me why Yogesh didn't get endorsed by B.PAC and many more probably wondered about that. You go to the B.PAC FB page and read the comments and you'll learn of lots of idiosyncracies in their list of 14 that they endorsed: Virtual greenhorns with no background of service (only claim to fame being that she campaigned for one of the B.PAC Core Committee members Ashwin Mahesh in his last campaign for MLC election), Candidates from mainstream parties with complaints pending against them (Krishna Byre Gowda - see link in image, Tejaswini Gowda - as seen in one of the comments, Ashwin Mahesh - click on http://myneta.info/karnataka2013/index.php?action=show_candidates&constituency_id=54), Two candidates in some constituencies but not in others where there are good candidates.
Edit: B.PAC has clarified that the complaint against Ashwin is that of a defamation case filed while he was an editor of a magazine. There are other improprieties he is a part off. But, let's leave out the criminal case for now.

B.PAC's response is that we went through a thorough process. A process doesn't become thorough by saying that you are thorough. And what about Agenda for Bangalore being endorsed by candidates from parties which doesn't endorse it. They will easily sit behind the excuse of the party to do nothing. The only ones who got unlucky are people who didn't care enough to speak to them, didn't know them personally OR those who didn't realize that saying the right things was what mattered.Having said all this, it could have been a great initiative if the execution was correct.

On the why was Yogesh not endorsed question, we knew all along that Yogesh would not get the nod ahead of Ashwin Mahesh (considering that he was on the core committee) and actually attended several B.PAC meetings (including the inauguration) as well as featured on the B.PAC homepage till recently. Per a tweet from one of the people in B.PAC, he resigned after he filed his nomination. That is a good 3 months after he started his campaign and also several months after he became president of Loksatta Party. Does reek of gross impropriety (using a position in a neutral forum to favor yourself)? And being a part of Yogesh's campaign over the past 6 weeks, I know some of the things that Ashwin and his team have stooped to during this campaign (spreading lies, spamming folks, volunteers posting on different forum recommending Ashwin without as much as a disclosure, etc) that it doesn't surprise me at all that he might have used some of his friends to get together to endorse him and a few of his party members under the guise of a neutral initiative. 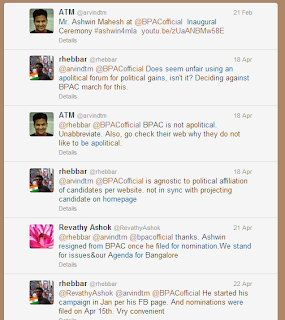 Isn't this like maybe a Congress Party getting 3-4 of its promoters to form a so-called neutral governance improvement initiative and just before the elections use that forum to promote some of its candidates? How is this different?

A few friends who volunteered for B.PAC and took part in some of their activities earlier have started showing their frustration on the forum. This definitely could have been avoided if
1) They asked Ashwin to resign from B.PAC and avoided all references to him after he officially joined politics as president of a party (especially)
2) They were more open about how they chose candidates and why they chose multiple candidates in some constituencies and not in others. If splitting votes is a problem in one constituency, it is a pain in other constituencies too, isn't it? 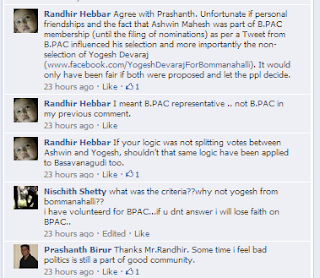 PS: Subsequent to this reaction, B.PAC has now come back asking other candidates to request them to consider them now. Isn't that a little too late? And will they drop the names on whom criminal cases have been found OR other better candidates were found. Question will remain.

PS2 (update on 5/2 at 11:15pm) : Two days after Yogesh submitted his credentials of over 18 years of volunteering under various groups part-time, his last 3 years of full-time service under IAC, AAP, Corruption Saaku, BANA and other initiatives after he quit his job to go into full-time public service and how he was aligned to B.PAC's AfB and there's not as much of an e-mail acknowledging the receipt and no-one receives the phone. Again, looks very convenient to favoring their favorite. Maybe, they plan to endorse Yogesh after May 5th and say "Oops sorry, we were busy organizing events for Ashwin Mahesh and others". :-) I personally have lost all respect for M.D.Pai and all the others with all of the above events. I am sure he and his group don't care about my one voice. But, I will make sure I tell everyone who'll listen about what I feel are the true colors of B.PAC.
Posted by Unknown
Email ThisBlogThis!Share to TwitterShare to FacebookShare to Pinterest